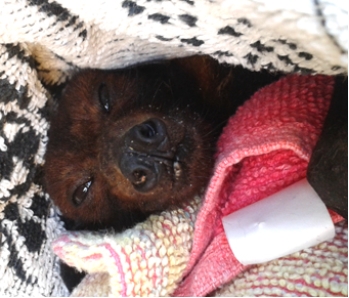 Now I have finished my course of vaccinations, I have finally started rescuing. My first bat was entangled in fishing line with a fishing hook embedded in her side – the constriction injury was severe, and she was euthanized.
The second had been up a food tree for a week without flying away, and appeared to have a wing injury. He could clamber around the tree perfectly well, just out of reach of my pole! Finally I got him to the ground, and he began to crawl, his wing injury very apparent now. Unfortunately he was a euthanasia case too.
My third call out was for a baby found on the side of the road, having crawled away from his dead car-struck mother. A woman and her daughter found him and arranged to meet me for a handover. When I arrived, the little girl was cuddling him, his wings spread around her body! I gently explained how this probably wasn’t a great idea as I wrapped him for transport. He was very dopey, and luckily hadn’t bitten or scratched at all. Sadly, this little dude (below)was also euthanized – he had a compound fracture of the shoulder.
As an introduction to bat rescue, you might think that three-for-three euthanasia would be a depressing start, but although the outcomes have saddened me, the experiences have also been heartening.
Firstly, there’s the opportunity to end pain and suffering – to provide a quick and gentle death rather than a drawn out one. And secondly, there are the people – the members of the public who care enough to want to help. These days, flying foxes need all the support they can get.
At all three rescues, the people involved remarked on how unexpectedly cute and vulnerable the bats looked, and how they would never look at them the same way again. In fact, the mother said that her daughter was now keen to become a wildlife vet when she grew up.
So, even sad endings can have their upsides. Still, I hope my next rescued bat has better luck!
Species:
Bat
flying fox
bats
flying foxes
Stories about:
bats
bat rescue
flying fox rescue
flying foxes
Bookmark/Search this post with

‹ Microbats At Long Grass up Not All Farmers Hate Bats ›