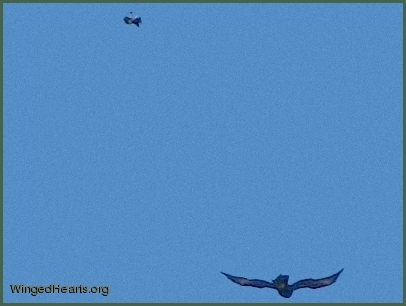 Saturday morning I was at the front gate chatting to Vicky Magpie when the noisy miners let out an almighty screech. Looking up, I saw a huge wedgetailed eagle wheeling overhead. Vicky went very still, and watched the eagle intently. But then the eagle started to glide away out over the valley, away from our magpies' territory. Then I saw why!

Maggie had launched himself from the highest tree and was powering down to catch up to the eagle. The relative sizes of our brave bird and the eagle can be clearly seen in the photo. On Wednesday I had had another encounter with our resident eagles. I was driving to town and rounded a bend, and saw him launching himself up from the road just ahead. His wingspan, eight feet or so, made a great spectacle. But he had something in his claws - it looked like a lizard. They like to sun themselves on the road and often are found dead, run over, But it appears that if the humans don't get you, the eagle will.

So when I saw the eagle a few days later, I knew why the local animals fear them so much. The Magpies ("policemen of the bush") don't like trouble in their territory, and so they repel the eagles energetically. Here is a video shot just before the above photograph. It isn't terribly clear, but you can see the incredible turn of speed Maggie puts on as he speeds up. He has a lot of work to do, because the eagle has already got into the 'thermal' and is simply stretching his wings and letting the hot air currents lift him up and away from his pursuer.

Despite his speed and agility, Maggie didn't catch the eagle on this occasion. The eagle's mate had spotted the chase and had wheeled around in behind and was closing rapidly on Maggie, so Mags had to make an abrupt turn and dive down out of the fray, doing a 180 turn and gliding back into his patch of trees.

If he had not been interrupted, he might have pursued the eagle for a few miles. When that happens, the magpies seem to have a rule: any bird who chases an eagle can land anywhere, no matter whose territory it is, to eat and drink and take a rest before setting off home. The reason would be clear if you had seen Maggie after his flight: completely exhausted for quite a while after.

I think the eagle pair are the same ones we always see. Being big birds with a need for large prey, they have a very large territory that would include maybe dozens of magpie territories. To see just how big they are, there is a breathtaking photo at http://www.australianfauna.com/wedgetailedeagle.php.