Until we met our magpies I had never really thought about animals having complex social systems. It’s pretty easy to think of animals as “dumb animals”! But our Maggie, sadly no longer with us, changed all that. By ‘adopting’ us into his family and introducing us to so many new friends of many bird species, Maggie opened a new world to us. All around us, birds (and, as stories from others show, other animals too) are conducting complex friendships, negotiations, and deals; they make promises, work to find good ‘positions’ in the world for their kids, and much more.

We humans get a bit uneasy when we discover we aren’t quite as far advanced beyond other animals as we like to think we are; laws of inheritance are a case in point. Surely no other animal has inheritance laws?

Well, there are clearly defined magpie inheritance laws. The countryside around our house is divided up in various ways by the various species. Magpies have one ‘map’ of the territory, on which they define the boundaries between their lands. The two species of butcherbirds here, pied and grey, share a single map between them. In other words, the magpies ignore the butcherbirds sharing their territories and vice versa, but the pied butcherbirds and the grey butcherbirds very much do take notice of each other and refuse to allow the other species into their zone. The butcherbird system has its own complexities, which I haven’t completely worked out, but I think I can tell you some details about magpie inheritance laws that might help you make sense of magpie activities around your place when a magpie dies.

Novelsit Resa Nelson continues her story about how the finches in her garden trained her.

The finches have been nesting on my balcony for years, and it's common to get two nests (at different times) in the same flower basket each spring.  I'm always fascinated by the behavior of each family because they're so different.

It took the parents a while to train me when to go out and buy a basket (they let me know when they're ready to build a nest), as well as how I've communicated with a mother that I only want to water the plant and not harm the nest or eggs. 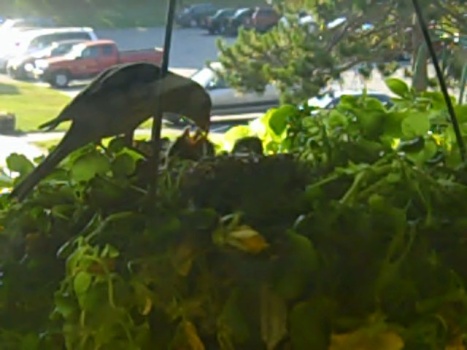 She was at first upset until I showed her exactly what I was doing, and then it was like watching a light bulb go off over her head and all I had to do from that point on was show the water bottle to her and she would fly off to let me water and stay calm instead of getting upset.

I love your website!  I've been a huge fan of birds all my life and have friends who are bird rehabilitators.  Your stories about birds are charming.  My readers know how much I love birds, and I'm sure they'd love to learn about your site!  I have a Red-Tailed Hawk that I've befriended (by chasing away crows that were mobbing it).  But what my readers know best are my stories of how Purple Finches nest on my balcony every year, just a foot from my window.  In fact, I plan to post a video on YouTube of great footage I got of the babies exercising their flight muscles and nearly flying out of the nest before they were ready and will send you the details shortly.

Each year Purple Finches nest one foot from  my window.

In each family, one baby takes a leadership role and does something unique.

Birds can communicate without words

Since meeting Maggie Magpie and being introduced by him to magpie families and to many other species of birds, Gitie and I have become increasingly and profoundly impressed by their high intelligence and, yes, wisdom.

I find it sad that scientists often automatically assume that only humans "think" or are "conscious". I have never quite worked out what they mean by that, because it doesn't take much looking to see intelligence in a great many other animals. Ask a cat owner!

The way contemporary animal behaviour scientists see the world is, in my opinion, profoundly unscientific. Their reasoning seems to go like this: animals do not think, they merely respond to instincts; they don't have feelings, they just react as their instinctive programming determines; humans, on the other hand, have a qualitatively different kind of intelligence and language and can construct uniquely 'human' realities like love, loyalty, and ethics, and can invent institutions like property ownership and inheritance.

The unimaginable Gulf Oil Spill has left us all with an intense combination of emotions, from sadness to anger to helplessness.

How could this happen? And now that the leak has been stopped, what can we do as individuals to help fix this horrific environmental disaster?

Musical duo Wilderland answers the call by releasing their new song "Fragile Day" with 100% of all proceeds benefiting the habitat affected by this tragedy.

Heralding from the mountains of Ashland, Oregon, Wilderland features singer-songwriters Scott Blum and Kat Sanchez. A veteran from the music industry, Blum (multimedia producer for Peter Gabriel, Soundgarden and many others) balances the exquisite vocal stylings of Sanchez who had been a member of a wide range of local bands most of her life.

After writing several original songs, the musicians began collaborating with renowned underground DJ and multi-instrumentalist Rara Avis (Desert Dwellers, Shaman's Dream) to realize their musical vision. It was during these studio sessions that the Gulf Oil Spill tragedy happened which deeply affected all involved in the project. Ironically, the song "Fragile Day" was being worked on at that very moment, and when explaining the song's lyrics to Avis, Blum realized that a powerful synchronicity was afoot. The song included the lyric "Fish are dimming while they're swimming / Blackened ocean of foam" which, although written nearly two years prior, was about fish dying because of an oil spill. Credit is given to Blum's wife Madisyn Taylor who suggested that "Fragile Day" be released immediately with all proceeds benefiting the habitat affected by the oil spill.

You can download two versions of "Fragile Day" by Wilderland with 100% of the proceeds donated to three important charities helping the habitat affected by the Gulf Oil Spill Tragedy. These organizations include The Gulf Restoration Network, EarthShare and the WILD Foundation.

Visit www.FragileDay.com to watch the emotionally powerful video and download the song to support this worthy cause.

Thank you for helping.