Over the past few months, our birds' feathers have all generally improved - Vicky's, for example, have grown nicely where she had a bald spot for about six months. But our new adult magpie, Wendy, has surprised us. Slowly but surely, her off-white neck feathers have got whiter - whiter and whiter. Are we going to have to change Wendy's name to William?

To see what I mean, take a look here at the difference between male and female neck feathers: males are pure white, while females have pale grey shading. And once upon a time, Wendy had a lot of shading, as in this picture: 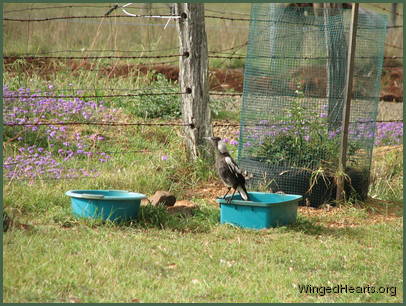 But now that Wendy has (only just) lost all her grey and become a fully black-and-white adult, look at how white she has become: 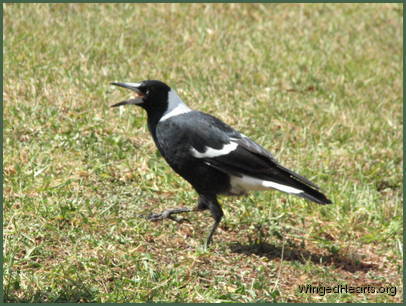 In fact, she is only just whiter than her older sister, Sophie. Here is Wendy on the left, and Sophie on the right, snapped only a few minutes ago: 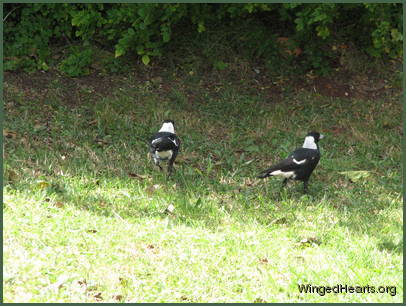 So is Wendy really William? Well we know Sophie is a girl, however white she may be, because she built a nest and laid eggs! Yet she is nearly white and Wendy, only just a shade whiter, looks to be as close as it comes to pure, sparkling, male-magpie white. Just goes to show that things aren't always what they seem.

BTW, half way through writing this, I discovered I didn't have a good photo of Wendy now from behind, so I went out and called "Wendy!" And Wendy came. And when I wanted a comparison shot, Sophie came. So yes, some people might think it's beyond a mere bird, but they do know their names.

Species:
Magpie
Stories about:
baby birds
Bookmark/Search this post with