Bertie Magpie does the incredible

Vicky, Bertie, and Mindy are having trouble right now visiting our yard because the 'teenage' magpie crew think they own our front yard. I suspect this is only temporary because Bertie will eventually take charge and reclaim their territory. But for now, Vicky is nesting and, I suspect, is also is ambivalent about being stern with the teenage gang because her only son Monty is a member of it. So we have been walking along the road each day to say hello to Vicky's family and give them some bread and cheese. But yesterday when I went, something odd was going on.

I called the gang, but things were strangely quiet. Then I heard a horse's neigh - coming from above me. I looked up and there was Mindy, who promptly produced another neigh to make sure I didn't mistake who was imitating a horse. Why? Good question, but then Bertie explained it all to me in a way that was both unmistakeable and remarkable.

I saw him slowly tiptoe out from the longer grass by the side of the road, and come onto the road where I was. Then - facing sideways from me, he opened his mouth, compressed his eyebrows, and turned to face me. He wasn't making a sound, wasn't being threatening, in fact he wasn't even moving, he was simply holding a pose for my benefit. And here is the pose he posed: 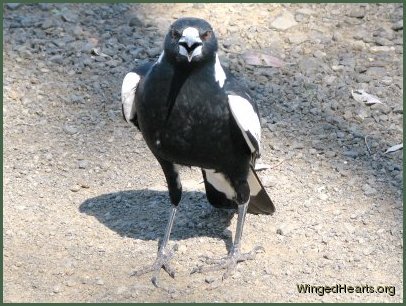 Just in case you can't quite see what he's trying to do, here is his face magnified: 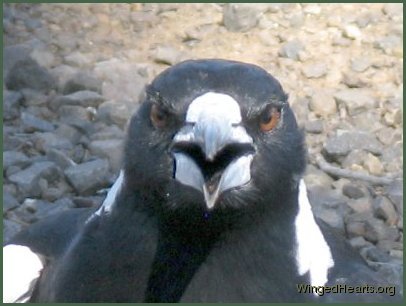 I don't know about you, but I recognised that face: he was 'doing' his very best eagle imitation. So I looked straight up. And there, way, way up, close to the line with the sun and so almost unseeable, was a circling eagle. Unfortunately the sun made a photo impossible, and the overhanging foliage (for our birds were all under a taller tree for safety) soon meant I lost sight of the eagle and couldn't find it again. But Bertie had told me, and as soon as I had taken my photo, he dropped the act and went back to being his normal magpie-looking self. So you can judge how strikingly unusual this pose is for a magpie, here is a normal photo of Bertie: 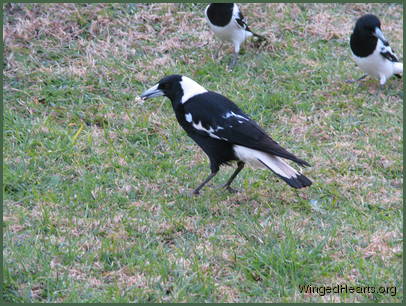 So what was going on? Was Mindy imitating a horse to fool the eagle? Does Bertie really know how to do imitations? Here's the problem: When you ask a bird a question, or it wants to tell you something, it takes some action and you know the answer. When we asked Vicky where was her nest, she flew to it. When a snake is hiding in the grass, the noisy miner squarks at you until you notice it. When an eagle is overhead, Bertie puts on a really strange face that looks like an eagle. Is it all coincidence? Once, twice, five times, maybe. But when you share time with a bird family year after year, and these 'coincidences' just keep on happening, you start to wonder - maybe they really know what they are doing?